What do you mean, this isn't window shopping?

I had actually not held back when I first realized that one of my guild's tanks was able to tame a beast, an alchemical snarler, in Athiss.  I went into full on "d'awww!" mode and healed the puppy the best I could, despite his not having a pet bar. (The same treatment was given to scavenged droids as well.)

But Alderaan last night was different.  My friend spotted a Thranta and I had to suppress every urge to compare it to a chimaera with sporebat-like wings.  He played WoW too; he would have understood....it's just the idea that I am most definitely a recovering hunter.

It's a good thing that my TOR Kalli equivalent over there is an alchemist!  Or....wait, no, that just means I'm going to be in trouble once she's Athiss level.  Sigh.  This is going to be a lengthy recovery process, I can tell.
Posted by Kalliope at 8:26 AM No comments:

Email ThisBlogThis!Share to TwitterShare to FacebookShare to Pinterest
Labels: swtor

Another big difference between TOR companions and WoW pets is that your companions already come with their own personalities; you don't get to determine more than your relationship with them, be it friendly or...otherwise (one way or the other).

Personally, I find this to be a huge perk.  I don't have to work as hard at coming up with a buddy's personality that differs from my own.  For example, the womanizing man of leisure companion that consulars get is definitely not a personality I would ever have created on my own.  I can't stand him!  And yet, he defined himself to me like one of my WoW pets would have: he soloed the boss at the end of the quest chain leading to his becoming a member of my crew while I took out the adds.  I genuinely did not think he had it in him.  Somehow, because he already had his own personality, this made that accomplishment all the greater.  It was perfectly timed, too, since that was the way I accepted him enough to even grudgingly let him aboard my ship.  It's amazing; my actual personal feelings toward the character mirror the choices I would have made in game anyway.  I can't really describe it better than that.

There's something very real about having a companion whose mind is completely out of your control.  They think for themselves, which allows a more genuine response from you and your character.  It's an entirely different experience.
Posted by Kalliope at 9:44 AM No comments:

Email ThisBlogThis!Share to TwitterShare to FacebookShare to Pinterest
Labels: swtor

The Spirit of Adventure

I wasn't really sure what was going to happen when I started getting involved with SWTOR.  Players get companions rather than pets, so technically, that sort of thing shouldn't be covered by this blog.

However, I realized that's not what this blog is truly about.  It's about storytelling and adventure.  The excitement of the hunt with NPC buddies at your side.

And so, I shall be bringing you tales from TOR in addition to those from WoW.

I was sorely tempted to write about my companions from the beta, but somehow, lumping my virtual friends in with my virtual pets just felt wrong.  I'll address them at another time.  For now, I shall discuss the hunt of the objects that have currently captured my fancy: datacrons.

Datacrons are colorful boxes scattered throughout the world that give your character a permanent stat boost to an attribute when interacted with.  Some are well-hidden and require some skill to get to.  My interest was piqued yesterday after discovering one on Taris that involved circling around to the far side of the area to reach.  It was a simple path, just lengthy.  The hunt to find the entrance, though, was quite epic.  And thusly, I was hooked.

I've been using a guide for these other datacrons I've been seeking out, though I try to figure things out a bit on my own once I'm at the starting point.  A few of the ones I've chased have involved some pretty serious jumping....which I am not entirely great at.  Last night, however, I had to get considerably better at it, especially to get the ones on Coruscant!  The precision required to land some of the jumps is incredible and was previously beyond my ability.

What I like most about them is that they're a challenge outside the norm.  It's not about killing; it's about being wily and then executing.  Plus you get to wander into hidden areas via wall walking intentionally.  Win-win situation!
Posted by Kalliope at 3:20 PM 2 comments:

I tend to screw things up when soloing, even if it's completely possible for hunters to do said things on their own. I generally get them eventually, but not until I've done some trial and error and had some false starts.  Today was not one of those days.
I wanted to down the Greench on my own, since I simply couldn't be bothered tracking anyone down to go with.  Besides, I had complete faith in Ursa and knew he could do it.  The one time I'd previously faced the Greench this year, my tanking buddy wanted to know how hard he hit, so I took a couple of shots to the face: about 25k a pop.  Knowing the mechanics of the fight, I just knew Ursa could heal up in between.  And since credit is shared if you've tagged the beast at all, I didn't forsee the horde being a problem.
Amazingly, everything went as planned.  We whittled him down under half hp, almost 2/3s, before anyone showed up.  There was an alliance druid, then a horde shaman and paladin.  The druid kept messing with the shaman, even though all he was doing was hitting the Greench.  I couldn't do anything to stop him, since I was tanking....and besides, all I could do was yell at him to stop, anyway.  In the end, it looked like everyone got credit, so that was good.  Ursa and I only had one close call at all, and I just taunted off him and deterrenced while he healed.  Since we did the lion's share of the work and hadn't had any trouble before anyone else showed up to speed things along, I'm still calling it a strong soloing victory. :)
<3 Ursa
Posted by Kalliope at 6:49 PM No comments:

Patch 4.3 is here at last and of all things, I've been going the craziest with transmogrification.  I didn't really expect things to turn out this way, but in hindsight, I probably should have.

I've always held onto particular pieces of gear for all of my characters, either because I've liked them or because getting them was significant for me/my character in some way.  Unfortunately, I've ditched a lot of pieces too, since I ran out of bag space long ago.

At any rate, transmogrification for each of my alliance characters has been a unique journey.  Some are easier to figure out than others.  Others have required some trial and error.  One theme has remained true throughout: my characters and I all seem to be more drawn to simpler sets rather than flashy ones.  With all the gorgeous options out there, we opt for simplicity.  Go figure!  Flashy or not, I think they look good. 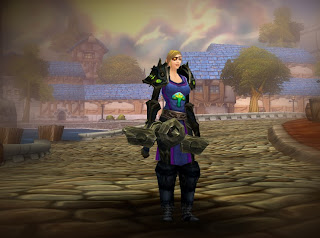 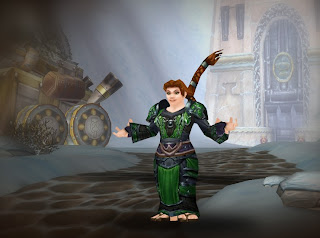 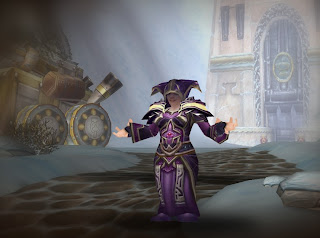 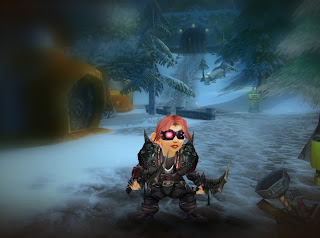 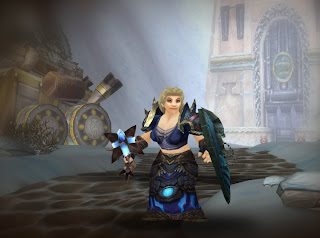 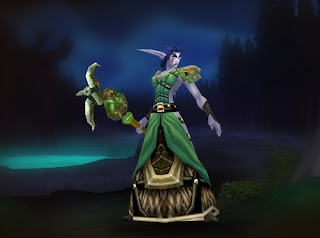 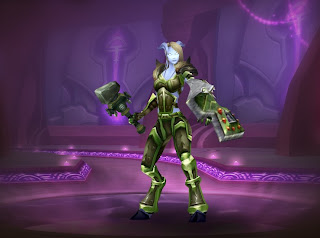 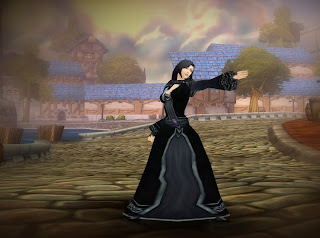 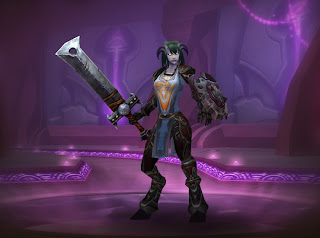 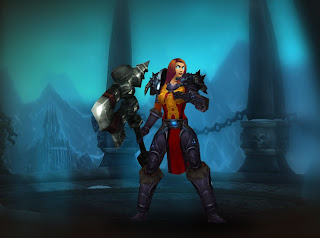 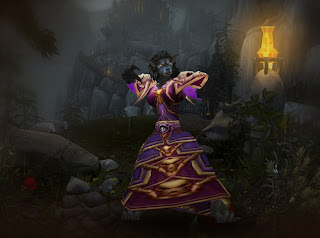 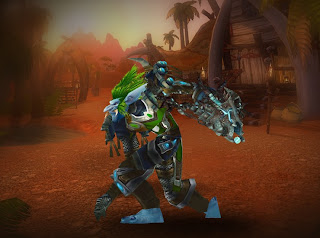 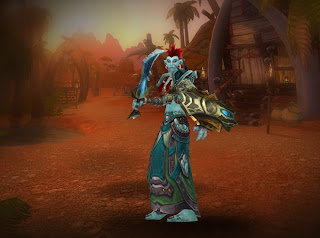 Posted by Kalliope at 3:32 AM No comments:

Email ThisBlogThis!Share to TwitterShare to FacebookShare to Pinterest
Labels: transmogrification

I've had a rocky relationship with Arcturis over the years.  We went from being best buds (on the original Kalli) to distant and disconnected (on Kalliope) to friendly enough (on Kallimon).  I've always had a fondness for him in the wild.
When the patch hit, I started farming hardcore for transmog items (I'll show off the results in a later post).  One of the few decent-looking polearms was in heroic Halls of Reflection, so I farmed like crazy for it.  Little did I realize that I'd spent an entire day with HoR on normal.  (I'm not that forgetful; it got switched when I grouped with someone else.)  I got frustrated with the lack of drops and flew out to Grizzly Hills to visit Arcturis.  Amazingly, he was actually there.  I know, I went to go see him and didn't expect him to be there - what's the point?  I was just trying to fuel my anger at that point.  Anyway, there he was, in all his bright cyan glory.  I didn't even think about what I was doing; I just stabled someone and tamed him in the last empty stable slot I'd had.  I hadn't even gotten back to the instance when his name, Polaris, came to me.  It all just...fit.  I'd considered Arcturis-as-Polaris before, but never done it.
After one HoR with Pol, I realized that I'd been on the wrong setting and changed it.  First run on the correct setting in god knows how many hours, the polearm dropped.  Guess he's a lucky little bear.  Ursa doesn't seem to mind him either.  The whole thing is strange, but it works.
We've been bging together again.  I did that with him when he was Hippomenes with Kalli before.  The vibe is different now, stronger.  I do love this bear. 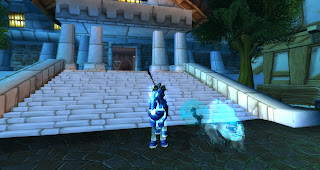 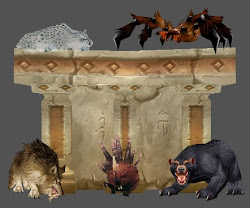 Important Posts from the Pantheon

Kalliope
This pet blog is brought to you by a writer with a thing for following virtual pets through virtual areas and reporting their movements in a journalistic fashion. She walks the line between all walks of hunter life, not fitting in with any one group, but not minding.